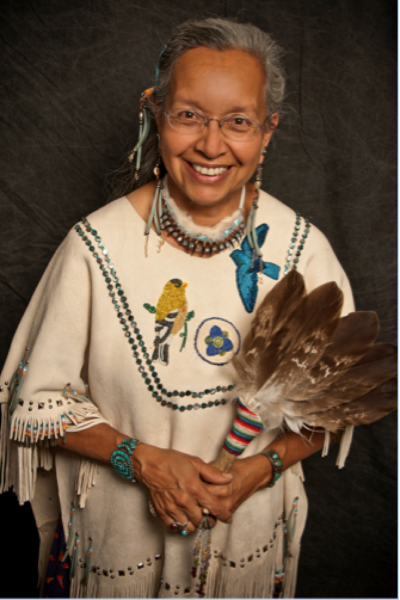 Láné Sáan Moonwalker has been an oracle, healer, spiritual teacher and environmental guardian for close to 50 years. She began her training in the healing arts at the age of 12 from friends and family members who were highly skilled curanderas (traditional practitioners who combine Native, Catholic, and African spiritual beliefs and practices). In 1987, she met her main teacher Tu Moonwalker, an Apache, the great great granddaughter of Cochise through his son Naiche, and Naiche’s daughter Doraté Moonwalker. This lineage is about a medicine way of Being. Tu was the holder of this unbroken Moonwalker lineage and Láné is an acknowledged part of that lineage. She herself is from an unbroken lineage through her Yoeme grandmother. Working with Tu helped Láné manifest her vision to train teachers, healers, oracles, and leaders in their own right. Together Tu and Láné founded the Philosophy of Universal Beingness within the Whole. The foundation of this system is about working with nature in a sacred way. Both Tu and Láné understood that if you don’t take care of the Earth there is no basis for anything else.

Láné Sáan Moonwalker is also internationally recognized and has traveled to Japan, New Zealand, Costa Rica, Canada, Mexico, and throughout the United States as part of her work. She sits on the International Council of Elders for the Aniwa Gathering. Láne holds a degree in humanities and the visual arts from the University of Colorado. She has been a licensed minister for more than thirty-eight years, and is a Reverend Canon in the Brigade of Light.